From Elements the Game Wiki
Jump to navigation Jump to search

The Arena is the game's current form of asynchronous PvP, implemented in Patch 1.28 as a replacement to Top 50, which had made obtaining rares relatively simple.

Below is a diagram which shows the two main parts of the Arena: challenging and deckbuilding. Both sides are further explained in subsections below. 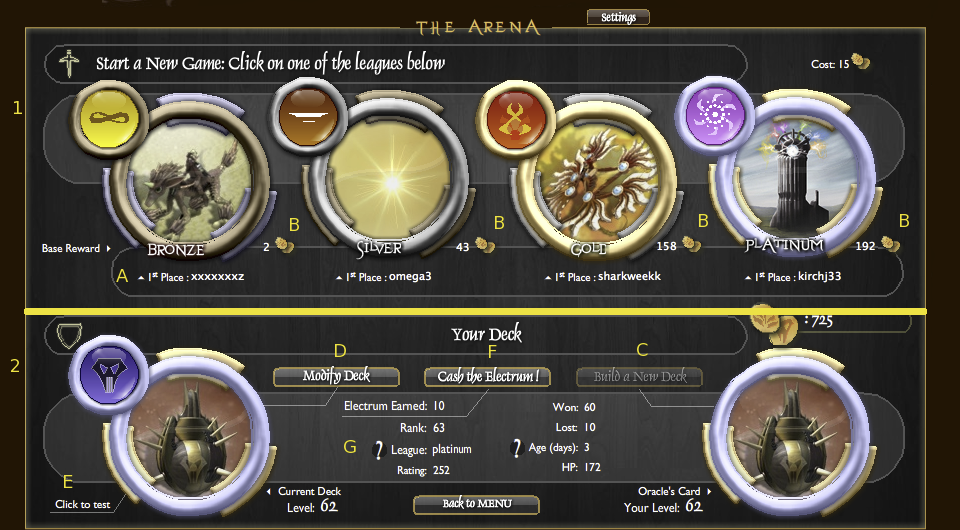 There are four leagues which, in increasing order of AI difficulty (and rewards), are:

On the diagram, the top half displays the four leagues, the top rated deck in each league, and the current electrum reward for each league. These rewards evolve dynamically, based on player activity (more plays decreases the award and vice versa). 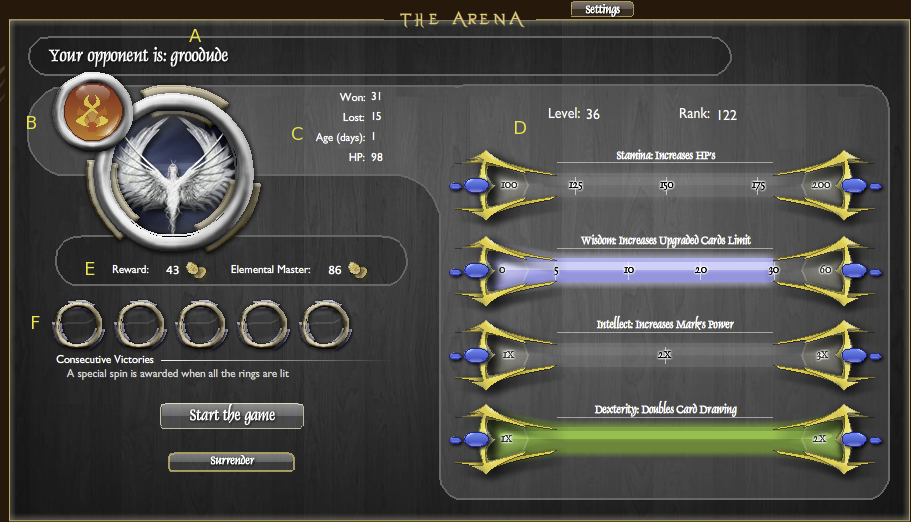 This is a screenshot of the screen just before you begin a match.

A) This shows the name of the player you're fighting

B) This shows the Mark and the given card of the deck you're fighting. The card is the one that your opponent has spun in the oracle, meaning he will have at least 5 or 6 copies (or 10 or 12 if he increased his deck's dexterity (see below)

C) Some statistics on the deck you're facing. There is :

D) The deck's level and rank (generally, higher leveled and ranked decks are more difficult). There is also the deck's bonuses given by the builder when created (see below).

E) Your electrum reward of you win against this deck. Winning against higher rated decks gives more electrum.

F) The number of rings you have filled (see below). When you gain enough consecutive victories (5 for Bronze, 4 for Silver, 3 for Gold, and 2 for Platinum) you will get a bonus spin. This spin will be solely composed of four different rare cards (unupped for Bronze and Silver, upped for Gold and Platinum).

This spin has a novelty to it compared to the other spins in the game: you can respin the reels individually up to three times each by clicking on the blue arrows (circled in yellow).

C) Your daily Oracle card. When you spin an oracle card, you are allowed to build a new deck around that card. You lose that chance at each oracle reset (7AM GMT), but you can spin another new card after each reset. If this card is the same as your current one, you can't build a new deck. You are required to use this card 5 times in the deck you build, adding one more copy if you wish.

D) This button allows you to modify your deck. The only restriction in that change is that it must be based around the same card.

E) Clicking on the card icon will allow you to test your arena deck with your current deck. This does not change your Arena deck's stats or your personal stats, but it can be used to gauge a deck's balance and potential.

F) This button allows you to cash in the electrum you have earned in Arena. As your deck wins fight against players, it amasses electrum, which is stored there until you transfer it to your usual electrum, so it can be used.

G) Various statistics: the electrum your deck has earned, it's rank, the league your deck is in, your rating (based roughly on win/loss ratio, it serves to calculate rank), number of matches won and lost, the deck's age (decks lose two HP the day after they're made, four the next day, and twice the amount every day until the deck is removed), and its Health Points. If your rank falls below 500, it becomes unable to be played until it somehow slips above 500 again or you make a new arena deck. 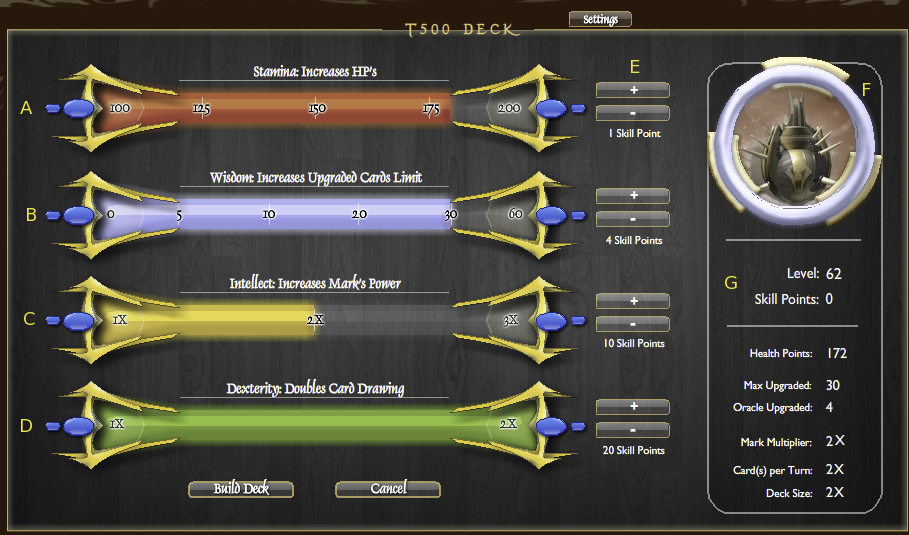 This is the screen you are in when you build a new deck, or modify an existing one. All bonuses are capped at 20 Skill Points.

A) Stamina: Increases HP by five for every point used, up to 200 HP.

B) Wisdom: Increases the upgraded card limit of the deck (to five, then ten, then 20, then 30, then 60) for every four points used.

C) Intellect: Increases your mark's power by 1x for every ten points used, up to a 3x mark.

D) Dexterity: Doubles the deck's maximum size and cards drawn per turn. think of it as a switch, rather than a slider like the others.

F) The card spun by the oracle.

G) A summary of the deck's bonuses. Includes the deck's level, Skill Points available, current Health Points (note this factors in HP lost due to the deck aging, while the diagram to the left of it does not), and the other statistics.